Our approach has always been evidence based and outcome focussed. So when we noticed an increase in hospital admissions amongst vulnerable and frail patients, we decided to investigate.

We looked at the admissions data and did some root cause analysis. We identified three main areas responsible for the increased admissions – falls, chest infections and urinary tract infections (UTIs). These admissions were classed as ‘avoidable’ as changes in basic care should prevent them.

UTIs are often linked to dehydration, which said to us that we could put a plan in place to influence this.

“The data showed us three main causes for admissions – falls, chest infections and UTIs. After some more analysis and talking to the care homes about their patients, we realised that UTIs could be easily prevented by increasing patient hydration.”

We spoke to various care homes about how much water patients were drinking and how often.

Our findings showed that either patients weren’t being offered drinks regularly, or that they struggled with the cups or glasses they were given.

From here we developed a plan which included assessing resources, engaging with care home staff with better training, and engaging patients by creating ‘Water Champions’ and reward systems.

Care Home residents monitoring their own fluid intake has proved successful – illustrating how little each resident actually drinks has encouraged them to drink more. 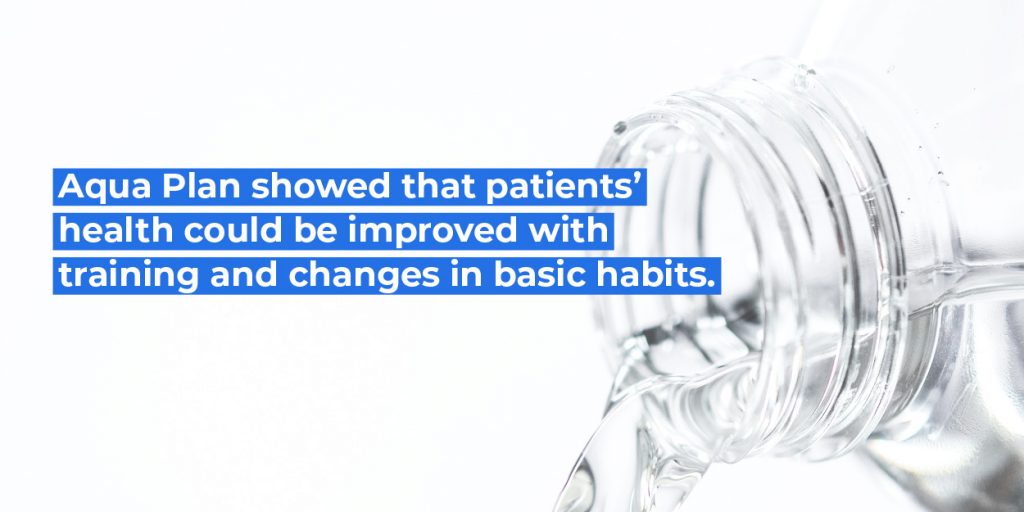 We were able to establish where extra staff training was needed by analysing the admissions data. Increased admissions in individual care homes could be linked to specific days of the week and even times of day, meaning staff working those shifts could receive additional training.

This simple solution, which we called Aquaplan, has had a significant impact, with overall UTI linked admissions reduced by 4%.

Since we launched Aqua Plan, it’s been adopted by two other organisations, and through local authority funding, the plan has been rolled out across all of County Durham.