In the early days of DDHF we were delivering a wrap around service to frail and elderly patients. The service had launched and was going well, but we noticed that something was happening.

Doctors in the 12 practices across Durham Dales were telling us they were seeing a lot of patients about non-clinical issues. It was important things like housing, care packages and mobility – issues that affect people’s health, but indirectly.

They didn’t specifically need a doctor to deal with them, but there wasn’t anyone else. And without getting patients this extra non-clinical help, their existing frailty put them at heightened risk of ending up in hospital.

Of course the GPs helped as much as they could, but it was using a lot of their time. And more Doctors’ time spent on non-clinical matters meant fewer appointments for people who were ill.

We identified a need for a system that kept people out of either doctor’s waiting rooms or hospital, and linked them to the support they needed to live safely and independently in their own homes.

Our answer was to create a new role of a Health Care Coordinator.

There were only one or two similar schemes operating in other areas, but not a set structure or model that could be implemented, and not one that would meet the individual needs of people in Durham Dales.

We looked at the frameworks of schemes in Glasgow and Tyneside, but the real breakthrough came in late 2014.

Domiciliary care workers had an inbuilt knowledge of the types of care and support people needed. Spending time with them helped to understand how to keep people happy and healthy at home.

This first-hand knowledge shone a light on exactly what patients’ needs would be, including some that hadn’t previously been considered. 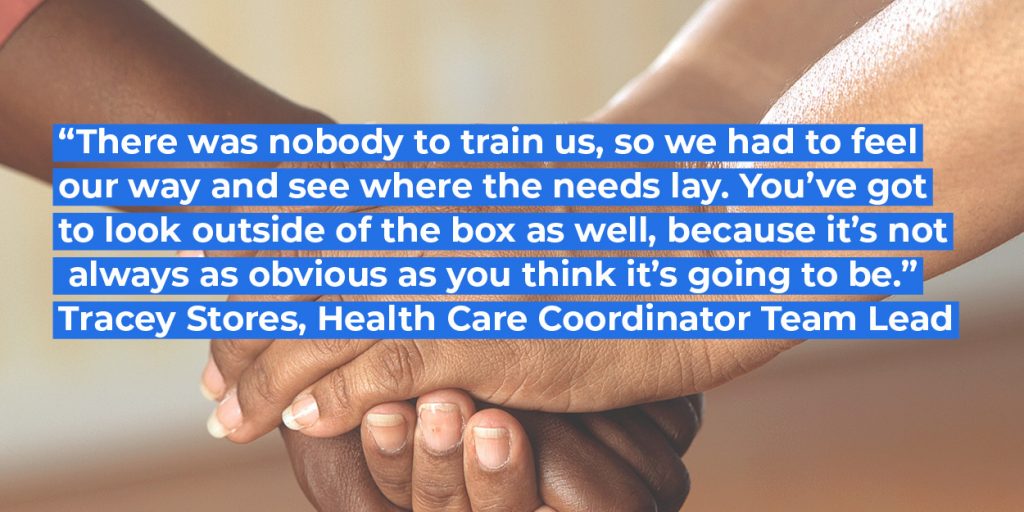 With a clearer picture of the range of services patients would need, we set about building a network of contacts. Finding and building relationships with the right people and organisations would give the team the tools they needed.

But the team also needed an approach to using those tools. Or more accurately, for patients to let the team use them on their behalf.

This was a brand new concept for people to understand. It wasn’t a GP, nor was it a social worker. That lack of familiarity with the team and what they were trying to do was an obstacle they had to overcome.

Part of the resistance they faced was around a perceived stigma of social care, and a fear of losing their independence by being taken away from their home.

But through investing time, building a relationship and earning trust, the team were able to show patients the true aim was to keep them safe and well in their own homes.

A good example is that of an 84-year old patient living alone in a remote location.

The patient was having to put bin bags in a wheelbarrow and take them down a long track to be collected on the road side. This was putting her at significant risk of a fall or other injury.

After speaking to Durham County Council, we made sure that assisted bin collections were arranged, meaning no long trips up and down the track. Something as simple as that made a big difference to the patient, and also built a great deal of trust.

This proved important for how the team needed to approach their work. If they could demonstrate how they could help, it earned a patient’s confidence, which made them more likely to open up about the support they needed.

As the team’s workload grew with more patients with different needs, the scope of the team need to grow too.

With frail and elderly patients, the risk of falls is a constant. Taking on assessing falls risks in patients’ homes themselves meant quicker help for patients, whether that was walking aids, installing grab rails or changing existing care packages.

Increasingly, inappropriate housing was also becoming an issue for people the team saw, and they responded by building up a network of housing associations who could help.

The expansion beyond purely health-based needs was part of the wider evolution into the Community Wellness Team. 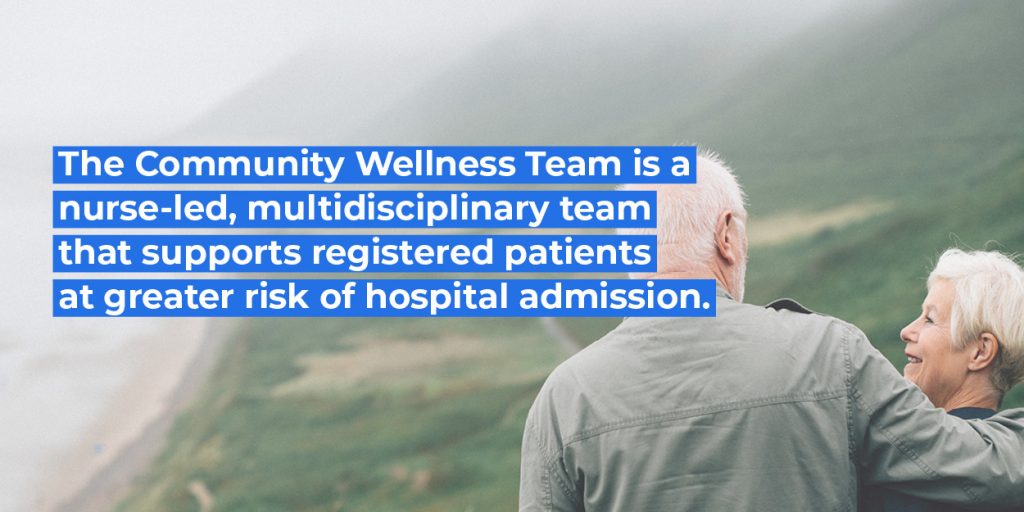 Another step in the evolution was to proactively find people about to be discharged from hospital, and make sure an appropriate care package was in place.

Often, when patients left hospital there would be short term measures in place, which would often mean people being readmitted just a few weeks later. Or someone having physio in hospital, but not have it included as part of their care package at home.

This was the sort of thing the team were there to catch. And soon, rather than targeting a reduction in admissions – something that is difficult to accurately measure – it became about reducing readmissions, and addressing a cycle that could cause patients decline to spiral.

Since early 2018, the team have been part of discharge meetings. This has meant they can take the impetus on home assessments or care packages, both of which can reduce the delays in people leaving hospital and returning to their homes.

The longer a patient waits in hospital to be discharged, the greater their risk of infections, or loss of strength and mobility through being in bed – all of which can ultimately lead to readmission.

By organising quicker, safer, and appropriate discharges, the team also help to free up capacity in hospitals too.

As well as the support of the wider DDHF organisation, and the license to innovate, the skills and attitudes of the people recruited have played a part in the team’s growth and success.

As mentioned, winning the trust of the people the team are there to help is a key part of the work. This requires an almost intangible quality of being able to draw people out of themselves, and open themselves to being helped.

The way the team has operated has also been significant, with mutual support and a collaborative approach. Complex or unusual cases are frequently discussed and debated in team meetings, with experiences shared and gained.

The relationships the team develop with people can last for years, and they prioritise the continuity of care for the patient. So in the case of those with advanced or complicated needs, or those who have been supported for a long time, it’s vital the rest of the team understand the specifics, so they can take it on should there be staff absences.

The job can be demanding on the people doing it, as they inevitably work with people who are struggling, who are unwell, and in need of help.

This attitude again speaks to the type of people who are drawn to – and best suited for – this important role: those with a desire to put other people first, to think outside of the box, and make helping their patients their number one priority.

Despite their rapid growth in just a few short years, the team are not resting on their laurels, with several new ideas and challenges on their horizon.

A future step would be to have a presence in hospital waiting rooms, and to be able to interact with people in advance of them being admitted. As well as assisting those who perhaps do not need to be admitted but do need support, the team would be able to act as an advocate and important point of continuity for an elderly or frail person moving through the hospital system.

A further potential development would be forging closer links with the Community Psychiatric Team, allowing them to be more proactive in providing mental health support for patients.

More immediately, the advent of Primary Care Networks (PCNs) to pool resources, staff and services across patient populations of 30,000 to 50,000 patients, will lead to the biggest growth in the team’s history.

PCNs have introduced a focus on Social Prescribing – a new term, but largely the same function that the Community Wellness Team have already been performing.

A key difference though is the expansion beyond the frail and elderly to anyone aged over 18. This will bring with it new needs and challenges, especially in areas of mental health, addiction, poverty, family life and parenting skills.

But the addition of three new team members, along with the strong foundation built by the team over the past 5 years stand them in good stead. Many of the people and organisations who will be able to help with solutions to meet these new challenges are the same ones that relationships have already been forged with.

This puts the DDHF considerably ahead of the curve in developing a fully formed social prescribing service that gives invaluable help and support to people who need it most.